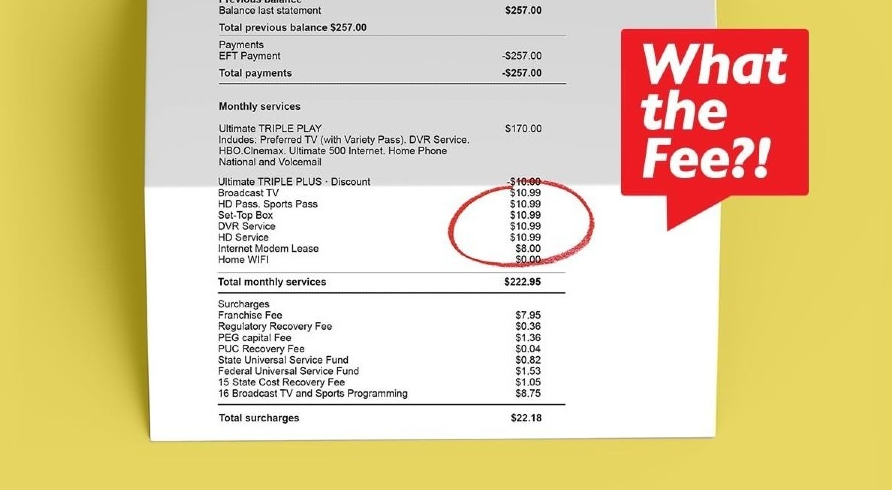 Most internet service providers have been providing broadcast services along with internet connection for a while now. However, recently, with the massive increase in the use of online media streaming platforms, most people are not fond of cable TVs. They no longer use the services.

I have been using Xfinity’s internet services for a while now, but I have not availed of their broadcast services. Nevertheless, recently when I was analyzing the monthly bill I received, to my surprise, there was a broadcast TV fee added to it.

It turns out I have been paying the fee for a while now without realizing it. Naturally, my first reaction was to call customer care. There, they told me that since all the customers receive the same signals, whether they choose to decode them or not, they have to pay the fee.

After this, I decided to do some research on my own to find out whether people could waive the fee or not. I was surprised that most companies, including Spectrum and AT&T, were following suit with this practice.

The most effective way to get rid of the TV broadcast fee is by negotiating with the company’s customer support. Otherwise, you might have to look into third-party service providers that don’t require you to pay extra for services you don’t need.

What is a Broadcast TV Fee?

According to the service providers, the broadcast TV fee is the expense they have to pay to be able to provide local broadcast stations to you. However, know that this is not a government-mandated fee, and it increases without any warning from time to time.

Unfortunately, since they are receiving the signal, whether they decide to decode it or not, they have to pay. This means, as long as you are subscribed to the TV tiers, you will be required to pay the extra fee even if you are not availing of the services.

Where did the Broadcast Fee Come From?

Now, the answer to this question is pretty interesting. One of the oldest broadcast service providers, DirecTV, owned by the same company that owns AT&T, started a fee system called the ‘Regional Sports Fee’.

The company claimed that this was done to help them make up the cost of broadcasting sports channels. Users who were not even fond of sports and who did not need the services still had to pay this amount.

Soon after, AT&T followed suit and started the ‘Broadcast TV Surcharge’ in 2013. This was labeled as the amount required to help the company recover a portion of the fee the company has to pay the local broadcasters to carry their channels.

Within a few months, other companies like Comcast and Xfinity started charging similar fees. According to recent reports by consumerists, surcharges like these can cause a difference in the bills by as much as $100 annually.

Comcast was recently sued for this practice, but the company refused to waive the fee.

Do You Have to Pay a Broadcast Fee if You Only Have the Internet?

If you are using the Internet only and have ‘cut the cord’, you will not see broadcast TV fees on your bill again. However, there are ways in which you can keep the current service you are subscribed to by negotiating with the company and reducing the broadcast TV fee.

It is unclear why the companies are charging their users a broadcast fee, according to the corporate view. It is nothing more than a tactic used by internet and cable service providers to extract money from the pockets of their customers.

Additionally, the fee is advertised as a non-increment price. However, as mentioned, it is not regulated by the government; hence, in reality, it does not exist. In addition, companies can increase prices at any time.

The consumerists call it a clever trick used by billing companies. This is why the amount you are charged is different based on the cable you have subscribed to. Comcast has set its own fee according to its requirements, while Spectrum has set a fee based on its own requirements.

There is no way to avoid the broadcasting fee completely. However, some service providers do make this negotiable, and you can call customer support to talk to them about the fee.

If they’re charging you a lot, you can negotiate with them to waive a certain percentage. If you are able to strike a valid bargain with customer support, there is a chance the fee will be significantly reduced and, in rare cases, removed.

Inform Them About Your Wish to Cancel

While talking to customer support, don’t shy away from explaining that the fee is a nuisance for you and you are not comfortable with the charges.

Also, make sure to inform them that if the charges are not dropped, you may opt-out of the service altogether. Many people claim that adopting a dissatisfied tone and explaining everything clearly has helped them strike a deal with their service providers.

Of course, the company will try to negotiate with you and will try to justify the fee by saying that it is how it is. However, at this point, you need to hold your stance and negotiate.

Your initial response should include waiving the fee altogether. But if the company won’t budge, negotiate to reduce the fee amount as much as possible.

If you cannot strike a deal with the company and end up deciding that you want to cancel your service, you can always opt for an alternative service. Although companies like Comcast offer 260+ cable channels, have you ever realized how many channels you watch?

Most of these channels are useless for you because they are either in another language or they broadcast shows you are not interested in. Hence, you can go for services that provide fewer channels but the ones you will enjoy watching.

For instance, YouTube offers around 85 channels that are much more useful. Another option is HULU with Live TV.

How to Cancel Xfinity TV

To cancel your Xfinity TV, visit xfinity.com/instant-tv/cancel and enter your credentials. Note that it takes 48 hours to process your cancellation request.

Once it is processed, you will receive a notification. After the cancellation, your Xfinity Internet service will remain active, but access to instant TV will be discontinued.

How to Cancel Spectrum TV

You can cancel Spectrum TV by calling their toll-free number and talking to their customer support. Since the company is a contract-free provider, you will not have to pay any cancellation fees or early termination fees.

How to Cancel AT&T TV

You can cancel your AT&T TV subscription at any time by calling their toll-free number. However, based on the contact you have selected and the duration of the contract, you might have to pay some cancellation fee.

To make the most of your money, you can even get a Mesh Wi-Fi Router for AT&T to take advantage of your high-speed Internet.

Final Thoughts on Getting Rid of Broadcast TV Fee

If you are not a very technical person and don’t exactly know how to negotiate with the companies regarding the broadcast fee that you have been paying for a while, you can hire third-party companies to do so. A number of bill fixers will evaluate the bill and will negotiate with customer support on your behalf.

These companies have a lot of experience in negotiating with companies like Comcast. They are well aware of the current market trends, so they know precisely when to strike and what to say.