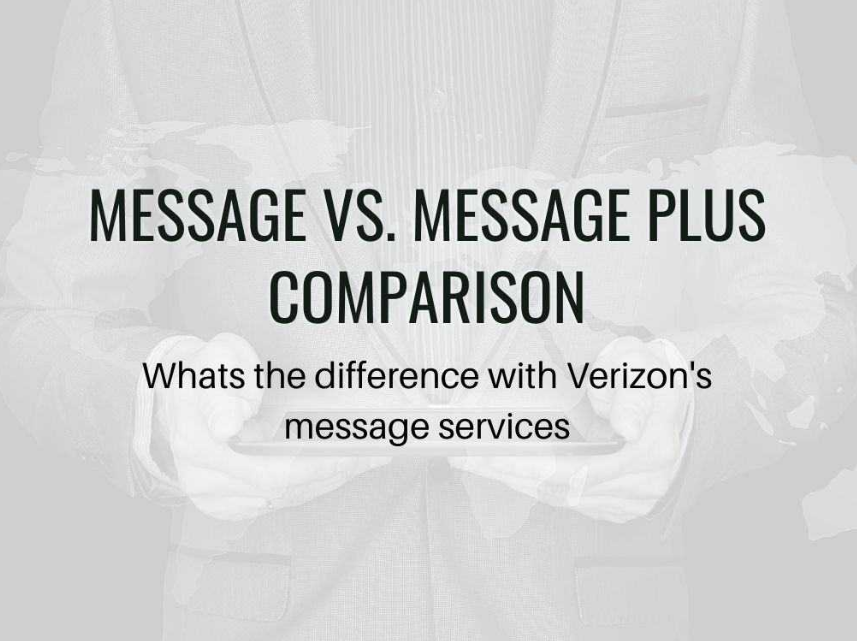 What is the Difference Between Message and Message Plus on Verizon? From the beginning of the mobile phone revolution, text messaging or SMS has remained an integral and outstanding feature. Over some time, the characteristics of text messaging improved and started to offer a lot more. Initially, it was only possible to send text messages with a limited number of characters, then came MMS, and then audio and video files could be exchanged.

The emergence of smartphones brought about a paradigm shift in how these SMS and MMS platforms are handled. From OS and OEM to service providers, everyone offers messaging apps that let you do more than what was possible previously.

Leading applications in this regard are Android Messages – now Google Messages, Verizon Messages – now Message+, and Samsung Messages. Due to the increasing number of OEMs opting for Android OS, Android devices have the most significant footprint. Given all the flexibility that the platform provides, many manufacturers stick to basic OS features that help keep the devices running smoothly.

Following this is Verizon, the most active and most prominent service provider. By negotiating exclusive deals with almost all the manufacturers, the company goes above and beyond to facilitate its customers. Messages is one of these services, which has been popular with subscribers.

Samsung is the largest of all OEMs. I think it is fair to say that Samsung and Android go hand in hand. Therefore, the company is able to develop the majority of its applications in-house. If you have a Galaxy S10 or even a Galaxy S9, you must enjoy an enhanced user experience with these customized applications. By default, Samsung Messages comes preinstalled on all Samsung phones.

These applications and their features are so practical that they even compete with other messaging apps like WhatsApp or Facebook Messenger in certain areas. Find out which Android Messaging App is the best by reviewing these three main messaging apps.

This is the official Google app for SMS, MMS, and RCS (chat). With its clean, intuitive, and comfortable design, you can connect with anyone from anywhere at any time. It combines the reliability of texting with the richness of chatting, enabling users to send individual and group text messages, share pictures, GIFs, emojis, stickers, video, and audio. It provides instant notifications and thoughtful replies features.

As well as working in dark mode, the app can also be used in low-light conditions. Apart from multimedia content, Android Messages also allows you to send and receive payments via Google Pay. The app’s search function is one of its most distinctive features. Simply tap the search icon and select a specific contact to see their complete messaging history. Certain carriers also support applications’ connectivity over Wifi or data networks. The app lets you see what your friends are typing, get read receipts, share higher quality images and videos, and a lot more.

Android OS 5.0 – Lollipop introduced messages. They are available since then. The majority of Android phones and tablets have an OS version higher than this.

Verizon Messages is a text messaging app that allows you to send and receive messages across compatible devices. So, if you have an Android phone, a tablet, and a PC, you can sync all your messages using the app. You can also make and receive calls on tablets using Message+. Keep in touch with family, friends, and co-workers with customizable conversations, either individually or in groups. This app’s best feature is the eGift Cards feature. Within each conversation, Message+ also provides access to other features. Among these features are Yahoo Media Search, Glympse, Yelp, and Kanvas. The app also supports location tracking services, engaging public profiles, and driving mode.

So why are there two apps? In what ways are Verizon Messages and Verizon Message+ different? The app was originally launched with Android 4.2. Later on, after the launch of Android 8.0, the app also got a significant overhaul and was relaunched as Message+. The latter offers some new features that were not available before, including chat support.

Samsung Messages is the default tool for sending and receiving texts on all official Samsung devices. The app provides users comfortable, safe, and easy access to SMS, MMS, and even chat messages. The best part is that all the features come preinstalled, and users don’t have to sign up for any additional service features.

The app provides users with access to text and multimedia messages, extended search, blocking and protecting messages, previews of URLs, mark messages as read, and support for Talkback. Since Samsung traditionally develops most of its devices’ applications, the integrations and operations are flawless.

Having reviewed all the features that all these applications offer, we notice that there isn’t much difference in that area. Everything comes down to user experience and support outside of a particular brand or carrier. Based on this, Android Messages appears to be the winner. Even so, with support for other devices and carriers, it is worth trying each application at least once.

This Google Messages vs Messages + vs Samsung Messages comparison should be useful for you.